There are lots of awards in the board game industry, but the Spiel des Jahres is the one that publishers really care about, because it’s the one that sells games. Over the last few years, board game enthusiasts have become a little critical of the award and the choices made, but the truth is that these awards are designed to showcase German games that appeal to families. They’re generally awarded to titles that are easy and quick to learn and don’t take an entire afternoon to play. 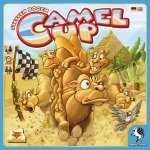 It’s always exciting to check out the SdJ nominees and recommended games – to guess what might make the judges excited that year. The 2014 nominees list isn’t altogether surprising, but there’s some oddity. Splendor and Camel Up were both talked about quite a bit as contenders leading up to the nominee announcement. Concept was a bit out of left field, mostly because it’s less of a family game and more of a party activity. It’s still a worthy nominee, but notable because of a couple of omitted games. Steam Park from IELLO was expected to earn some love, but was completely overlooked. Love Letter from Pegasus Spiele seemed like it might almost be a shoe in, though it did make the Recommended list.

The Kennerspiel award nominations go to expert level games, a nod to recognizing games that would appeal to more serious gamers. Though these are heavier and more involved games than you would find in the Spiel des Jahres, they are still considered to be mid-weight euro games. This year, the nominees include eggertspiele’s Rococo from Matthias Cramer, Louis malt and Stefan Malz. Rococo is set in France during the reign of Louis XV, which has players as tailors and dressmakers preparing the fashion of the day for one of the most lavish balls yet being held at the end of a few weeks. PD Publishing’s Concordia from Mac Gerdts is a mediterranean trading game (this time with no rondel!), and Pegasus Spiele’s Istanbul from Rudiger Dorn is a fresh take on Xavier Georges’ Royal Palace pick-up-and-deliver idea using modular tiles.

I suspect Istanbul is the favourite to win here.